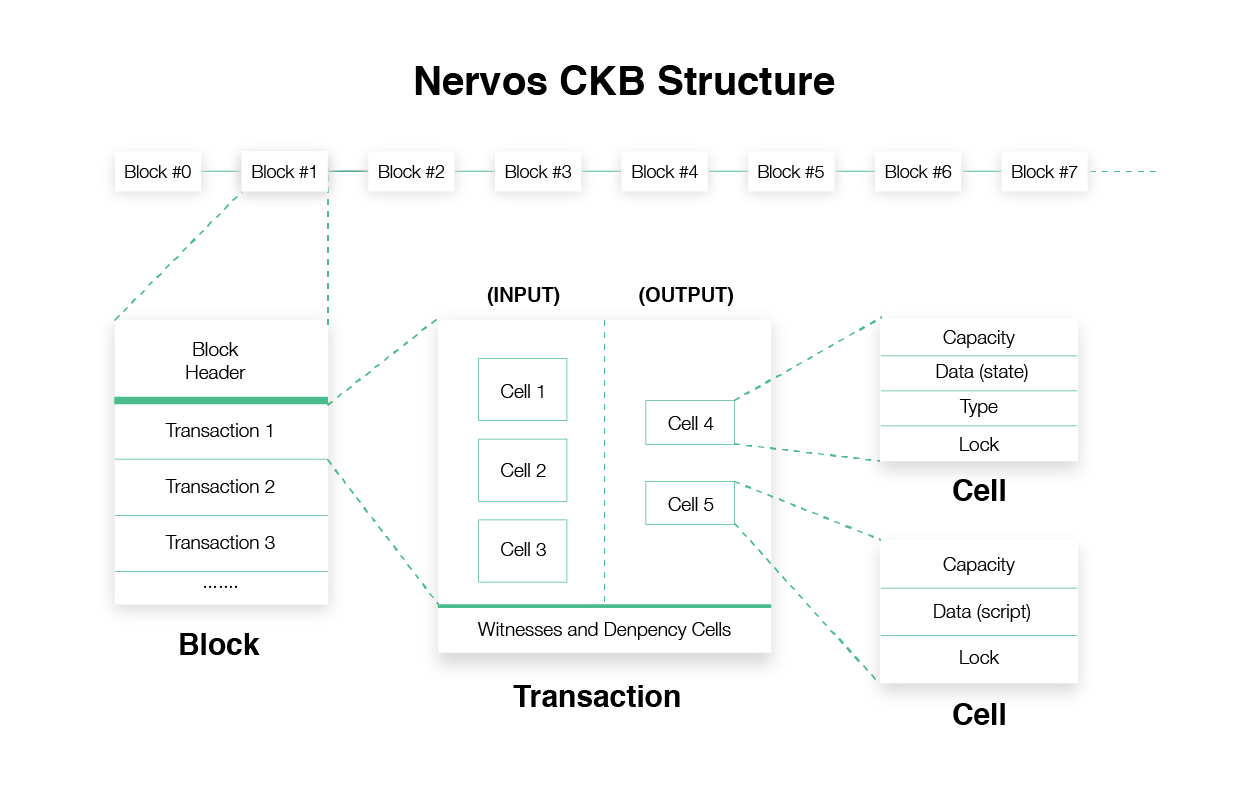 You can find detailed descriptions of these data structures in RFC#0019.

More information about the cell can be found in the Nervos CKB RFC.

A cell is the most basic element in CKB system. Cell can be used to store state or scripts.

A state cell may contain the state data of an application or a UDT (User Defined Token), for example, a user's balance of a particular UDT.

A script cell may contain the logic of an application or the rules of a UDT, such as a rule preventing negative UDT balances.

It is feasible that a cell could store both the state and the logic of an application, however, if this application will leverage the power of Layer 2 solutions, this is not recommended. This may result in the problem described in "Looking at ownership in the EVM".

We will explain how these four fields work in the next section.

More information about the transactions in Nervos CKB can be found in the Nervos CKB RFC, as well as this article describing transaction structure.

Transaction is for updating the cells on-chain (i.e. the state on-chain). By sending a transaction to a CKB node, the transaction will be verified and confirmed by all nodes and the new cells containing new state will become valid on-chain.

Each transaction has a group of input cells (old state) and a group of output cells (new state). This is different from transactions in Ethereum, in which transactions only contain an event to kick off updating state on-chain. After receiving a transaction, an Ethereum node will calculate a new state based on the transaction data and prior on-chain state, then replace the old state with the newly calculated state. While Ethereum generates new state on-chain, Nervos CKB requires state to be generated off-chain and then subsequently verified on-chain.

Here is an RFC that lists all the transaction verification rules defined by CKB protocol.

The sum capacity difference between the input and output cells are collected as mining fees paid to the block miner. It is also possible to pay mining fees with UDTs as long as a miner is willing to accept them.

As mentioned above, the lock script defines the ownership of a cell.

In a transaction, each of the inputs has two values: an input cell and an array of args.

Input cell is technically a pointer to a previous transaction's output cell. This is why the input cells are sometimes named previous_output.

In the transaction, there is also a field named witnesses, which is an array of arbitrary arguments to fulfill lock and type scripts' requirements to make the transaction a valid one. Witnesses are user inputs of the state transition represented by the transaction.

A typical lock script may contain the information of the public key of the cell owner. To unlock a cell, a user usually needs to include a signature in the witnesses field. During the verification process, the lock script will recover the signature and check if it matches the stored public key, ensuring the transaction is indeed signed by the owner of the input cells.

For example, Alice owns a cell, with a data field that stores her balance of a particular UDT, its type script defines the rules and logic of this UDT. If Alice wants to send some of her tokens to Bob, then she would use this cell as input, and create an output cell with same type field value, but use Bob's lock script for this output cell. Alice can then assemble the transaction and send it to a CKB node. (Alice also needs to create another output cell for herself if she is not sending the entire token balance in this cell to Bob)

In practice, script code is NOT included in the type or lock script directly. The actual code would be stored in another cell, referenced by the type and lock scripts through their hash. This is done by referring to these cells in the dependency cells field (deps) in the transaction using their outpoint, and placing the hash of their data fields in the code_hash field of type or lock.

During the verification process, the specified scripts are loaded and executed in a CKB-VM instance. If the instance returns a code 0 upon the end of execution, the scripts execution is succeeded. Check the CKB-VM RFC to learn more about how it works in the CKB-VM.

A block structure contains a group of transactions and a block header including metadata. It is the miner's job to pack transactions into a block and do the Proof-of-Work calculation to find a "seal" to seal the block, then broadcast it to the network. Other miners will receive this block, verify it, collect some transactions from their own transaction pool and start to mine a new block based on this received block.

In CKB, a block also contains the information of uncle blocks in the block structure. It has the complete uncle block header as well as their proposals. Please refer to RFC#0019-Data Structures for more details.

There are two limitations miners consider when selecting transactions to pack into a block: computing cycles and transaction size.

In CKB, the computational resources consumed by transaction verification, (specifically script execution), is measured with cycles. Each instruction in CKB-VM carries a different cycle cost. The sum cycles consumed by all scripts executed when verifying all the transactions in a block is limited by the MAX_BLOCK_CYCLES value defined by the CKB protocol.

The size of a transaction is measured in bytes. The sum size of all the transactions in a block should be lower than MAX_BLOCK_BYTES as defined by the CKB protocol.